Successful replication of influenza virus requires the coordinated expression of viral genes and replication of the genome by the viral polymerase, composed of the subunits PA, PB1, and PB2. Polymerase activity is regulated by both viral and host factors, yet the mechanisms of regulation and how they contribute to viral pathogenicity and tropism are poorly understood. To characterize these processes, we created a series of mutants in the 627 domain of the PB2 subunit. This domain contains a conserved P[F/P]AAAPP sequence motif and the well-described amino acid 627, whose identity regulates host range. A lysine present at position 627 in most mammalian viral isolates creates a basic face on the domain surface and confers high-level activity in humans compared to the glutamic acid found at this position in avian isolates. Mutation of the basic face or the P[F/P]AAAPP motif impaired polymerase activity, assembly of replication complexes, and viral replication. Most of these residues are required for general polymerase activity, whereas PB2 K586 and R589 were preferentially required for function in human versus avian cells. Thus, these data identify residues in the 627 domain and other viral proteins that regulate polymerase activity, highlighting the importance of the surface charge and structure of this domain for virus replication and host adaptation. 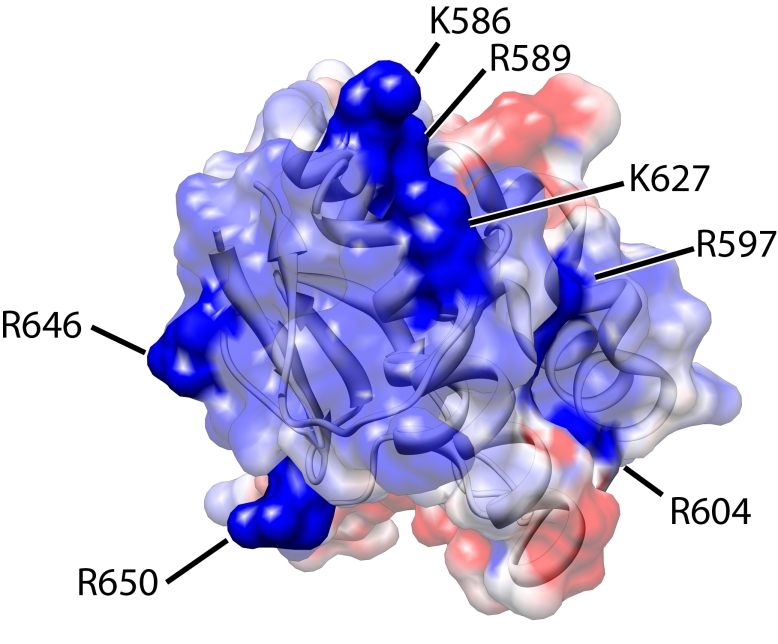 Conserved basic residues on the surface of the 627 domain.